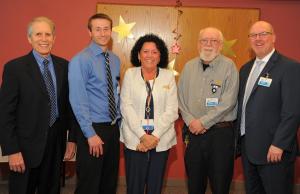 Three Hayes Green Beach Memorial Hospital employees were recently honored with the Fulton Award of Excellence, the hospital’s highest recognition, during an annual ceremony Tuesday, March 29. The award winners, recognized for their exceptional contributions to HGB’s success, are:

Fiala joined the HGB team in December 2002 as a house supervisor, and moved into her current position as a registered nurse in the emergency department in May 2004. She was nominated for the Fulton Award because of her leadership in her role and positively influencing her team’s morale. Fiala facilitated programs to recognize and build her team in a way that “demonstrated creativity and innovation that improved communication and teamwork.” Her supervisor also wrote, “She continues to create first and lasting impressions being respectful to patients and their families. She clearly shows pride in the Emergency Department.”

Hankey has worked in the Engineering department at HGB for nearly 15 years. He was nominated for a Fulton Award because of his dedication, generosity, ability to anticipate customers’ needs and his pride in HGB. His attention to detail and positive attitude have repeatedly been recognized by coworkers and patients. According to his supervisor, “Hankey exemplifies HGB’s core values and consistently shows respect to others. He always treats everyone the same and finds a positive approach to situations as they arrive; sharing that positive message with others so they too understand the circumstances.”

Campbell has worked in several health and wellness positions since joining the HGB team in 2007 – most recently as the health and fitness manager in MOVE at AL!VE. In addition to his duties managing MOVE and its worksite wellness programs, Campbell began managing HGB’s Cardiopulmonary Rehabilitation program in 2015. The success he had with his new responsibilities is why Campbell was nominated for a Fulton Award. Campbell helped improve employee and patient experiences in Cardiopulmonary Rehab and more fully integrated the services with other HGB services and programs. His supervisor said, “Jake is very proud to be part of HGB. This is demonstrated by him and his family’s involvement in HGB activities, including volunteering and representing the hospital at numerous events.”

Dozens of HGB employees are nominated each year for the Fulton Awards by peers, supervisors and customers. The award is based on:

The Fulton Award is named in honor of Robert Fulton for his many contributions as a member of the hospital’s board of trustees. Mr. Fulton was well known for helping bring to reality HGB’s dream of offering quality, local care. He took great pride in the annual award ceremony. Not because it was named after him, but because he wanted to honor the nominees and recipients and the “excellence radiating through HGB.”